Up to now, the diagnosis of suspected prostate cancer consisted of a palpation of the prostate (so-called digital rectal examination, DRU) and the determination of a blood value, the so-called prostate-specific antigen (PSA).

In the case of conspicuous findings, an ultrasound-guided biopsy of the prostate was performed via the rectum. Today, this procedure is increasingly viewed critically. Today, the primary aim is to avoid biopsies. However, if a biopsy is necessary, the tumour should be precisely and reliably targeted by the biopsy. Furthermore, the biopsy must ensure that there are no other tumours in the rest of the prostate. This is of utmost importance for planning a focal therapy. The solution is robot-assisted mpMRI/TRUS fusion and mapping biopsy of the prostate.

Two tumours are localised in the prostate shown: In the centre of the image above, with a dark centre, an aggressive prostate carcinoma requiring treatment. The image on the left, light blue, shows a prostate cancer that does not require treatment. 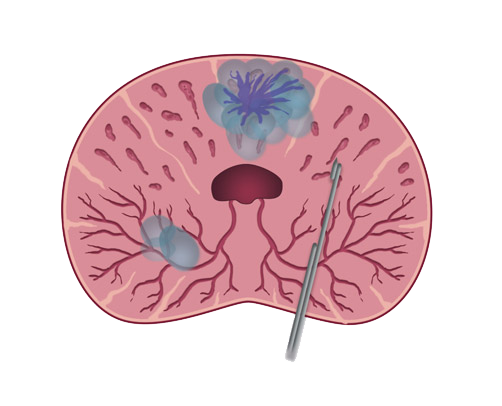 Both tumours in the prostate are not hit. 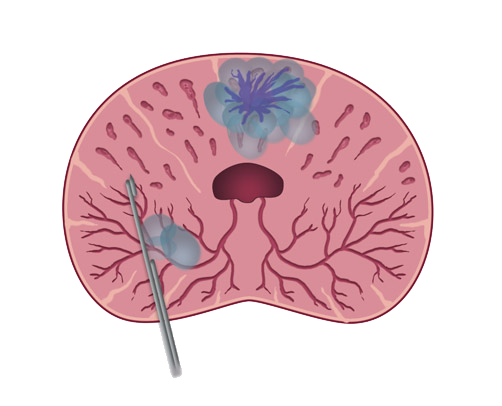 The low-risk tumour is diagnosed, the aggressive and dangerous tumour is overlooked. 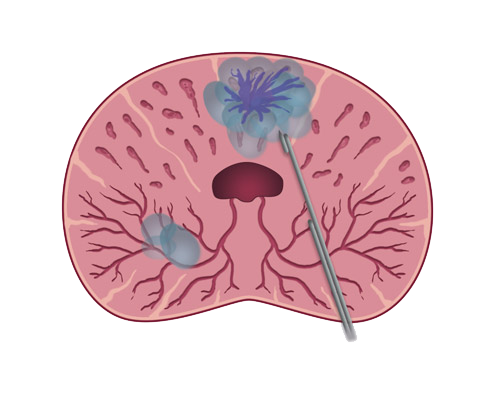 The relevant prostate carcinoma is only hit in the periphery and thus its aggressiveness is underestimated. 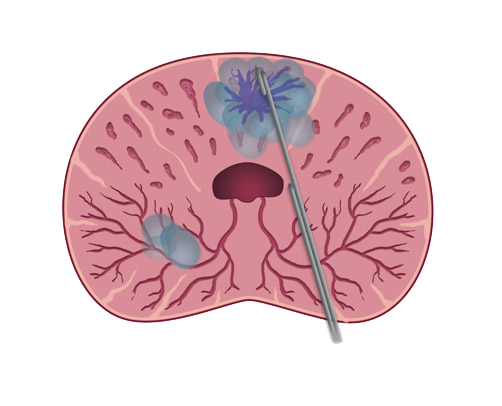 This is how it should be. The prostate carcinoma in need of treatment is targeted.

The standard procedure is the systematic transrectal ultrasound-guided biopsy (TRUS). In this procedure, 10-12 biopsy cylinders are taken from the prostate via the rectum. However, the sensitivity of this traditional method is limited. It is 53 % in autopsy studies. This means that a prostate carcinoma is simply often overlooked during the biopsy (Fig. 1). If the detection of a prostate carcinoma is successful with the TRUS biopsy, the question arises as to whether the result of the biopsy actually correctly identifies the fine-tissue tumour stage. This is of immense importance for therapy planning or prognosis assessment of the disease.

In fact, the risk of misclassification, i.e. aggressive tumours are overlooked or underestimated in their aggressiveness, by conventional prostate biopsy is between 21 % and 54 % (Fig. 2 and 3). Ideally, the aggressive tumour requiring treatment should be biopsied and classified in a targeted manner (Fig. 4). This is the only way to ensure optimal and comprehensive counselling of the patient.

What is an mpMRI of the prostate?

This special magnetic resonance examination combines a standard examination with a contrast medium examination and a density measurement of the tissue. 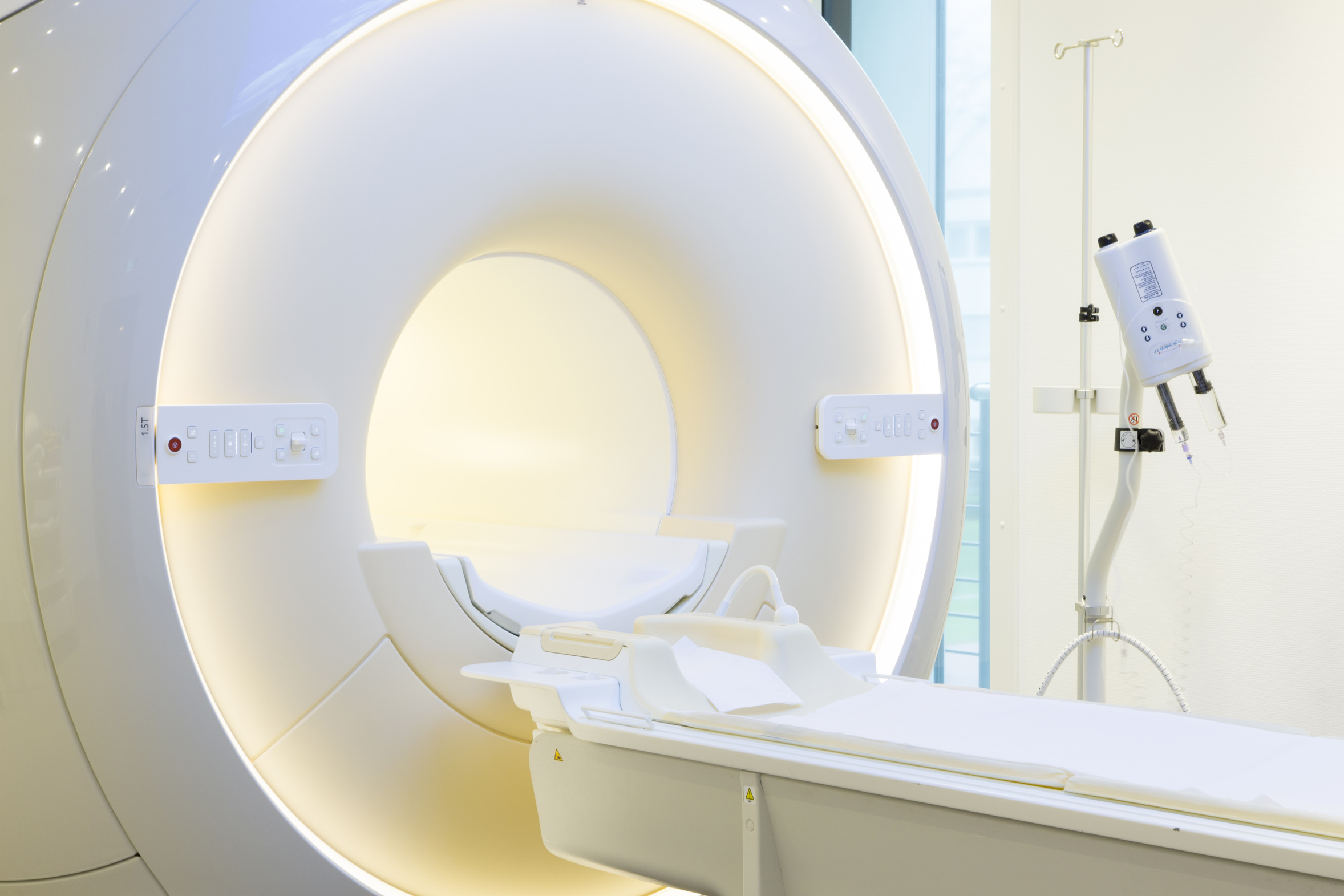 This allows an experienced radiologist to find regions within the prostate that are most likely to be cancerous. Often these are tumours that are not reached by conventional punch biopsy. The mpMRI can distinguish clinically irrelevant tumours from aggressive tumours and thus help to avoid unnecessary interventions.

We cooperate closely here with the radiology department https://radiologie.merianiselin.ch/ of our premium partner, the Merian Iselin Klinik in Basel. A core team of 3 specialists is responsible here for the examination and reporting of mpMRIs of the prostate. With more than 500 examinations per year, we as referring physicians, but also our patients, can rely on a great deal of experience and a very high level of expertise in this field.

What is a robot-assisted mpMRI/TRUS fusion and mapping biopsy?

The images of the mpMRI examination are reviewed by the radiologist and the treating urologist together. Areas suspected of having a tumour are marked. On the day of the biopsy, these marked images are read into the biopsy device used to check the removal of tissue from the prostate (prostate biopsy). At alta uro, the mpMRI/TRUS fusion and mapping biopsy of the prostate is performed in a standardised robot-assisted manner using the Mona Lisa system (biobot).

The biopsies are taken via the perineum and not via the rectum. This virtually eliminates the risk of bacterial infection. The procedure is performed as a short inpatient procedure under anaesthesia. 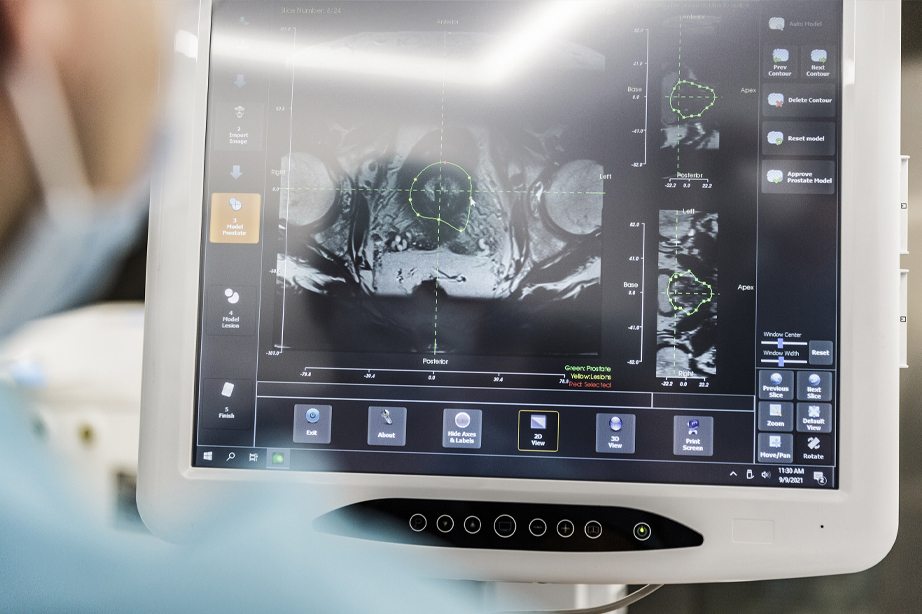 In the PRECISION study (2) published in the renowned New England Journal of Medicine, it was shown for the first time with the highest scientific quality that the combination of MRI of the prostate and subsequent targeted fusion biopsy provides more precise results than conventional ultrasound-guided biopsy. Almost 30 % of the study participants who had received an MRI had unremarkable findings. Consequently, these patients were spared a prostate biopsy, which the other participants in the study (without MRI of the prostate) had to undergo.

"When treating prostate cancer, the quality of life of those affected is our top priority. Focal therapy ideally complements our available treatment options and closes the gap between active surveillance and surgery or radiation."